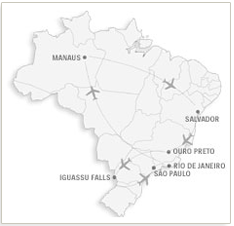 Arrive in Rio de Janeiro and transfer to the hotel.

Rio de Janeiro is the Capital of the State of Rio de Janeiro, and was also Brazil’s capital from 1763 to 1961. It is nestled between the mountains and the sea. Its magnificent shoreline includes charming bays and beautiful beaches, dotted with islands up and down the coast. Flying into Rio is a beautiful sight; whether at night or during the day, the visitors quickly find out why Rio is known as the Marvelous City. It is also an important center for art and fashion.

PM: The afternoon consists of a half day tour to Sugar Loaf: visit the world famous Sugar Loaf Mountain in the middle of the Guanabara Bay, which offers one of the most breathtaking views of the city. The tour also offers a ride to downtown Rio which features a panoramic view of the city. Overnight accommodations at Windsor Leme Hotel.

The morning will start with a tour to Corcovado. After a beautiful scenic drive along Rodrigo de Freitas Lagoon, passengers arrive at the bottom of the Corcovado hill where they will embark on a comfortable train ride to the top of the beautiful mountain, where the statue of Christ, the Redeemer is located. From the summit, enjoy the most breathtaking view in Rio! Return to the Hotel early in the afternoon.That evening experience Rio by night with dinner and a show. There is no other place in Rio that embodies the alegria or happiness of the Brazilian people more than the nightlife scene in the neighborhood of Lapa. Once the sun goes down, this normally quiet neighborhood turns into a bustling and vibrant area full of restaurants, nightclubs and bars. The streets fill with cariocas and gringos alike, who flock to this Rio nightlife Mecca with one thing in mind……fun!! From traditional northeastern forró, to Rio’s own samba, to reggae from Bahia, visitors will enjoy the best that the Rio music scene has to offer.

Evening:On the Rio Nightlife Tour, we will take you right to the heart of the action where our local guides will accompany you to one of the best clubs in Lapa, Rio Scenarium an unusual bar, a mix between an antique shop and an auction room, where the locals come to listen to traditional Brazilian jazz and samba. Dinner at restaurant. Overnight accommodations at Windsor Leme Hotel.

The morning starts with a Tijuca Forest tour by Jeep. Tijuca Forest is known as the world’s largest urban forest. With its paths, waterfalls and greenery, Tijuca forest is a mix of history and nature. The Afternoon is free to independently travel around the city. Overnight accommodations at Windsor Leme Hotel.

Transfer to Rio de Janeiro airport for flight to Manaus.

Manaus is the capital city of Amazonas, which is the largest state in Brazil. It is a modern city and one of the fastest growing in Brazil. It is also the ideal point of departure for visiting the rest of the Amazon region. Tour boats leave Manaus to see the Meeting of the Waters, where the black waters of the Negro River meet the light waters of the Solimões River, which flow side by side without mixing for several miles. Visitors can also explore river banks and “igarapes” (creeks), swim and canoe in placid lakes or simply walk in the lush forest.
After arriving in Manaus, the group will transfer to Hotel Tropical Manaus. The afternoon city tour of Manaus will visit some of its typical neighborhoods as well as the Museum of Indigenous Peoples, where guests can see some of the traditions, tools and garments used by these people. Next, visit the Teatro Amazonas (Opera House), the primary tourist attraction in the city. Overnight accommodations at Hotel Tropical Manaus.

On this day the group will transfer to the Amazon Eco Park Jungle Lodge for a 2 night program. Depart Manaus pier to see the Meeting of the Waters tour before arriving at the lodge. Lunch is included. Accommodations, dinner, overnight at Amazon Ecopark lodge.

The morning will commence with nature hike at a nearby forest followed by lunch.

PM: That afternoon visit the home of local Amazonian residents (cablocos) and have dinner with them.

Evening:There will be an alligator spotting tour at night. Overnight accommodations at Amazon Ecopark Lodge.

This morning visitors will visit Monkey Jungle. Next the group will transfer to Manaus airport for a flight to Salvador.

Salvador, the capital of the state of Bahia, was the capital of the country until 1763. The city is divided into two parts. The ´´Lower City´´ is at sea level and is where the city´s original port and commercial area, including Mercado Modelo, are found. It is also the best part of the city to experience a capoeira demonstration, a Brazilian martial art developed by slaves, which is an important aspect of Afro-Brazilian cultural expression. The ´´Upper City´´ is reached through the Lacerda elevator. This part of the city is where the majority of museums, churches and modern architecture are located. The city, without a doubt, keeps in touch with its African roots and traditions with respect to its cuisine, religion, and artwork.

Arrive in Salvador and transfer to the hotel. Overnight accommodations at hotel Bahia Othon Palace.

The day will begin with a half-day historical city tour. Participants start in the modern suburb of Barra and head towards the old, historical section of town, Pelourinho, with the most expansive selection of preserved colonial architecture in the Americas. The tour will visit the church of Sao Francisco and its exuberant gold-leafed baroque interior and the Pelourinho Square, the heart of old town. This tour shows two distinct aspects of Salvador: the new and the old worlds, concentrating on the early expansion of the city.

Evening : Witness Bahia by Night with dinner and a show at the intimate Miguel de Santana Theatre, in Pelourinho. The Bahia Folklore Company (Balé Folclórico da Bahia) is one of the most respected folklore dance teams in the world. The troop performs a seamless presentation of the multiple African traditions that permeate Bahian culture. Performances include the sacred dances of the Candomblé; puxada de rede, a song by fishermen in honor of Yemanjá, the goddess of the sea; maculelê, an acrobatic stick and sword dance with origins in the cane fields; capoeira, a martial art/dance created by Brazilian slaves and the samba de roda, a spinning, swirling version of the exuberant national dance. After the show dinner will be served in one of the many traditional restaurants in the area. Overnight accommodation at Bahia Othon Palace Hotel.

This day features a full day schooner cruise with lunch. Transfer to the pier and board a schooner to cruise to some of the 36 islands in the bay. Stop with time to relax in the sun or swim in the warm waters. Re-board for a short crossing to the larger Itaparica Island for lunch. Enjoy more time to relax on the beach or an optional visit to the colonial town of Itaparica before returning to Salvador.
Overnight accommodations at Bahia Othon Palace Hotel.

This morning visitors transfer out Salvador, for a flight to Belo Horizonte. Arrive in Belo Horizonte and get picked up at the airport and immediately transfer to the city of Ouro Preto.

Ouro Preto was founded in the early 18th century. It was built on rocky ground and declared a national monument in 1933. It is a masterpiece of Brazilian colonial architecture with fountains, churches, ruins and towers with shining colored tiles. Due to its distance from the coast, it is the only town in Brazil to remain as an outstanding artistic and architectural example of that era. Ouro Preto’s baroque architecture can be viewed upon as traditionally Brazilian. Overnight accommodations at Pousada Minas Gerais.

Start the morning with a walking tour of Ouro Preto followed by lunch: see some of the remaining sights of Ouro Preto and some of the surviving masterpieces of its colonial architecture. Ouro Preto is a trip back in time. Lunch is included, as are overnight accommodations at Pousada Minas Gerais

The morning starts with a transfer back to Belo Horizonte Airport for a flight to Iguaçu Falls.

The Iguaçu Falls are one of the planet’s natural wonders. Thousands of Brazilian and foreign tourists alike visit one of the country´s main tourist hubs. Iguaçu Falls is the municipality where tourist attractions and stunning natural beauty are one in the same. In the “Land of the Falls” it is possible to take in the splendor of the Native and man-made forests, rivers and lakes, and still have the opportunity to shop for unique gifts, souvenirs, and intriguing local art; not only in the Iguaçu Falls, but in Ciudad del Leste (Paraguay) and Puerto Iguaçu (Argentina).

Formed on the Iguaçu River, the falls go down from an average height of 60 meters (with a high of 82 meters), while the face of the falls is 2700 meters wide. The number of falls varies from 150 to 275, depending on the river’s outflow. The major part of the falls is located in Argentina, but all its lush, green beauty can be admired on the Brazilian side. Surrounding trails offer visitors a closer looks at the subtropical forests of Parque Nacional do Iguaçu (Iguaçu National Park) and take visitors to catwalks and lookouts to observe the falls. Arrive in Iguaçu and transfer to the hotel. Overnight accommodations at Das Cataratas Hotel.

The morning begins with a tour of the Brazilian side of the falls, starting from the hotel (located inside the Brazilian side of National Iguaçu Park). The 45-minute journey takes guests through the local subtropical forests. In the afternoon, enjoy a Macuco Safari boat tour: towed by jeep, visitors are driven through the forest with a chance to observe birds, wild animals and exotic vegetation. At the end of the 2 mile ride, a boat takes visitors upstream to the closest possible location under the thundering water falls. Overnight accommodations at Hotel das Cataratas.

The final day starts with a morning tour of the Argentinean side of the falls. Visitors cross the Argentinean border and end up in the Parque Nacional del Iguassu, 40 km away from the Brazilian border. A walking tour of the falls will follow. The trip will conclude with a nighttime transfer to the airport for a flight to São Paulo to connect to guests´ flights back home.